The last few months have been filled with many small musical milestones. There are the regular gigs, but each one becomes special, through the anticipation and energy brought to the gig by both the musicians and the audience.

A prime example being a gig at Tasma House a month-or-so ago. The Chief Executive Officer of the Country Fire Authority, and seven of his key personnel, spent a few days at a residential workshop on new ways of thinking and leadership. The CFA is a volunteer organisation, with 60,000 members and 2,000 permanent workers, with a huge responsibility during the bushfire season in Victoria.

Together with my band mates, Carla Maxwell and Phil Mac, we introduced these men to an instrument they had never seen or played before, and we ran an introductory workshop with them, which we had never run before. We also played and jammed together with the CFA guys on all sorts of percussion instruments.

The whole thing was a hit, and a musical milestone, in the sense of passing on, sharing musical experiences, and presenting gigs and musical products can take very diverse forms.  I don't think I will ever "make it" in the music biz, but new experiences, whilst making music in the biz, are like gold nuggets!

Another new experience awaits this week, with the invitation to play a "free lunch" at a local weekly event.  Apparently, every Friday in my town, there is one of these no-such-thing things in existence, and, according to one of the recipients, it's the best food in town!  It may be because it's free, but it also could be that food made with love, shared in the company of others, regardless of their income, status, or political or religious persuasion, is going to come out tasting great, regardless.

The milestone is yet to show itself in playing this gig, but the challenge is certainly there to find a way to compliment, musically, what most people do not believe exists.  I am looking forward to meeting the 40-70 people who turn up each week, despite the common wisdom about free lunches.

At a recent gig with "Shotgun Shack," my facebook status read:


"Shotgun Shack" playing Horvat's tonight in Downtown Daylesford.  More than a hint of Gritty Mississippi, Bangin' like an old V8 on a Hill Country road, raw and dirty in a ring of Fire and Sweat.  Bitter and Sweet, come down for a treat..... Stamp your Feet.....

At this gig I introduced a strumstick with a pickup, plugged in to all my noise-making equipment, and felt great, shedding three strings and a bunch of frets and working more with less, so to speak.  Like a cigar box guitar or a diddley bow, less strings doesn't equate to less music, and these days we are all trying to do more with less. 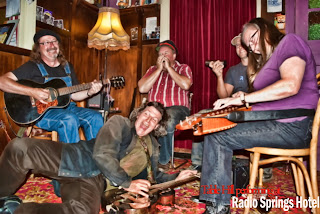 Table Hill, an acoustic trio delving into old time, new time, bluegrass, and blues, and that I am one-third of, will be playing at the Centre of the Universe, the Radio Springs Hotel on the 18th of May, 2012, and other dates over the winter.  Here's a little musical poster, with a taste of "Shortnin' Bread," done Table Hill style.

Tasma House and Gardens has been booked each weekend, and that gig pays a bunch of bills.  Making beds, doing the garden, maintenance, admin, etc., doesn't have a lot to do with music; but, to me, seems similar to the fortitude one needs to play gigs one after the other on tour. 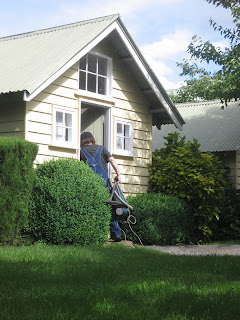 Some people join gyms or have exercise routines.  "Club Tasma," exclusively a behind-the-scenes workout centre, is alive with new ways to keep fit.  Have 20 people over to stay at your place for a coupla days, throw in a wedding celebration or a significant birthday bash, recover and do it all again the next weekend.  You'll soon know what I mean.  Club Tasma has openings for participants in vacuuming, dusting, bedmaking, bathroom cleaning, and laundry, and it's all "FREE!"  :-}

The mid-week here in the Central Highlands is very serene by comparison.  Perfect for songwriting, reflecting, recharging, and just enjoying the beauty at the back, front, side, and rear doors.

Here's to a fruitful and rewarding lead up to winter, 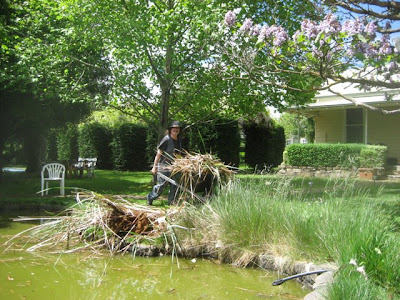