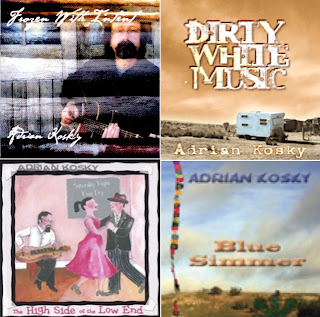 The High Side of the Low End
Review by Jeff Glorfield
The Age EG 2006
Feel-good music needn't be simple-minded, and warm and gentle do not equate with weak.  Adrian Kosky knows these things, and on his new CD he offers up 11 warm and gentle yet powerful little stories about places, people, lives lived and food, laced with humour that is wry and wise and maybe a little bittersweet.  But that's life -- you take it as it comes.  Kosky is an internationally acclaimed exponent of the mountain dulcimer, but when he's home he hangs his hat in north-western Victoria.  Working again with Richard Pleasance in his Daylesford studio, the pair blend elements of folk and bluegrass with hot licks of blues, maybe some Celtic flavour and a distinctly Australian sense of fun.  Kosky sings in a mellow, easy voice and adds banjo and harmonica to his dulcimer, while Pleasance handles the guitars, drums and everything else, along with sterling production.  Kosky's songs are full of nuance; behind such seemingly light titles as Hair in a Can and Small Country Town are the thoughts of a man facing up to the realities of his own ageing and the hard choices his kids face growing up in this world.  It's the real deal.
Dirty White Music
Review by Jeff Glorfeld
The Age EG 5/8/2005


Nestled in the forest west of Melbourne, between town and country, tiny Daylesford is a mix of long-established farming families and tree-change city migrants plus thousands of weekend wanderers. It's the right place for Adrian Kosky to craft his unique brand of music, a modern take on traditional folk blues with a kind and gentle, almost innocent feel. He plays a range of stringed acoustic instruments such as dulcimer, mandolin, dobro and guitar, but there is no fret-flaying pyrotechnics; the essence of Kosky's music is simplicity. He calls his songs "organic", which is difficult to define but easy to understand when listening. Richard Pleasance, formerly of Boom Crash Opera and composer of the Sea Change theme, produced the record in his Daylesford studio and adds depth and texture with an array of instruments including electric guitar and backing vocals. Kosky's purposeful, less-is-more playing is balanced by his singing, which is all warmth and honey, with a pleasing vibrato reminiscent of Country Joe McDonald at his best. Songs such as Broken Windscreen and Climbing the Ladder are superb, but it's all Australian, dirty white music.


Dirty White Music
Review by Lynne Pettinger
Americana, UK 2005
Australian country blues? Why not. The second album by Australian multi-
instrumentalist Adrian Kosky is something to behold. It's a folk-country-blues
mélange with charm, skill and intrigue. Kosky likes his traditional American folk instruments, playing more sorts of dulcimer than you might have known even existed, along with dobro, harp, guitar and more. This doesn't overwhelm the songs, as might have been a risk for someone with a clear expertise (and even a university scholarship in dulcimer playing). The arrangements are simple and nuanced making the right sorts of nods to history and tradition without being consumed with replicating the past.
Album openers 'I pushed your barrow' and 'Damed if I do' share a real blues feel, one that crops up again and again, including on a verging on the comic 'Other people's blues' . Other songs feel firmly rooted in a British folk tradition ('If I was a writer', 'The bigger picture', Climbing the ladder'. There's even a moment of sounding Australian (albeit, on 'Born to be', like the Go-betweens). Whilst making a nod to Dylan on 'Fear', Adrian Kosky can resist also showing his humour again, listing (as so many of us do) his he hope he
wont get caught when not wearing underpants, or worse. This humour, along with a political and social sensibility makes him an interesting observer of the world around him. Maybe its because we're too cynical to listen to celebratory songs, but 'my town' and dirty white music seem to be the weaker tracks, partly because they rock out just a bit more than either Kosky's gentle voice, or his delicate instruments really suit. Perhaps he can't quite be bothered to sing out loud, or doesn't really want to show off. Nonetheless, its an album of subtlety and talent. Worth a listen.
Frozen With Intent
Reviewed by Bernard Williams
Trad and Now
May 2003 edition
The trouble with having listened to parodies of blues songs [like Cliché Blues by Mic Conway’s band National Junk Band] is that it can be hard to take some blues-oriented offerings seriously and not to perceive them as unintentional parodies. But then, perhaps the answer is to not take them too seriously anyway and to happily treat some of them as parodies, intentional or not?!
Adrian Kosky’s offering has its share of the above [“Mercedes Benz Blues”, “Big Brained Woman” and, to a lesser extent, “I Got a Loss Here Lord”] and they point to a musician who can certainly play and sing the blues, But this CD also so much more.
Whether it is the three blues pieces, the gentle introspection of “Waking Up Older” and If You Don’t Want To Love Me Now”, the warm country blues feel of “That Thing”, the almost anthemic simplicity of “Frozen With Intent” or the all too short happy instrumental “Big Room Boogie”, these original compositions are delightfully varied and downright entertaining. One of my favourite tracks is the sparsely arranged “In My Barn”, which speaks to me about blokes and sheds- at one level.
Kosky’s singing and playing [guitar, dobro, bass drum, percussion, blues harp, cabassa, mountain dulcimer harmonica and foot stomp] are variously supplemented, complemented and complimented by backing vocals, percussion, bass and piano. The end product is a musical collection that has been more than competently arranged, performed and engineered.
Curled up near the fire, with a warm and/or warming drink on a grey Sunday afternoon, listening to Adrian Kosky left me anything but frozen.
Frozen With Intent
reviewed by Jim Low
Folk Australia 2003
Adrian Kosky is a singer-songwriter living in Daylesford, Victoria. He is an accomplished acoustic musician, playing guitar, dobro and harmonica. In the concluding track Kosky treats us to some mountain dulcimer. On four of the songs Kosky is capably assisted with extra instrumentation and vocals.
The CD begins in a solid, confident fashion with the blues and gospel sounding I Got A Loss Here Lord. Kosky has a very comfortable feel for the blues both in his playing and vocal delivery.

The songs are interesting in their variety of musical approaches. There is, for example, the reflective Waking Up Older with its haunting, repetitious melody. Then there is the fuller sounding, catchy song of dissatisfaction That Thing. The spirited Mercedes Benz Blues carries a warning that things are not always what they seem. The concluding Big Room Boogie is a brief and breezy instrumental.

The melancholy, confessional In My Barn demonstrates the effectiveness of a good melody. The title track Frozen With Intent, a song of procrastination, is enhanced by a very attractive piano and viola accompaniment.

The CD has an overall reflective, earthy feel. As Kosky says in his song In My Barn:

The songs of wood and steel
Wrap me in a country feel.