Trentham Bakery, Owner Builder project 2003-2005
The Buildings were purchased in 2001, with work beginning in 2003. The whole property was derelict, having not run as a bakery for 20 years, with anything of value having been sold off or stolen long ago. My job was to find a use for the property and keep true to the heritage of the buildings and the area. The shop front was renovated and restored, to act independently of the old scotch oven and stables to the rear. It is currently being run as a self contained up market B&B named Twigs on High.

Around the Historic Scotch Oven, I constructed an extensive cafe space with an outdoor courtyard, making a pleasant gathering space for the townsfolk and visitors to the region. Next to this is a small caretaker's residence with a separate shop front to the rear in Albert street. I still own the Bakery complex and one day may return to combine music and food passions together but currently, the Reid Brothers lease it from me and run their highly successful Organic Bakery/Cafe business, called “Redbeard” from there.

When purchased, this building was known as Groves Bakery, a baker’s home and pastry shop, built pre-1900 in the main street of Trentham.  It had no running hot water; and, with the last baker passing away in the 1980’s, was in a neglected state.  It reminded me of earlier places I had loved and experiences I wanted to repeat; and I thought that, once restored, it would make a great micro business for me or someone, who would like to live and work on the same site.  I did not  rebuild it to sell, but life doesn’t always go as planned.  It was purchased by the current owners in 2006; and they have turned it into boutique weekend accommodation, honouring the work and the quirky rebuild I completed, and adding their wonderful sense of style.  It is now called, "Twigs on High,"  and I am very proud of what the now-not-so-new owners and I have made out of what, in 2001, was derelict.
Azidene House, Owner Builder project 2000-2002

Azidene House, called Linton House when purchased, had a long and illustrious history as an old guest house, five flats, a fine restaurant, and luxury B and B.  Unfortunately, its roof and foundations were never attended to, making it a huge headache for most people who looked at buying it. It took 18 months of thinking for this one to show me what to do. With the experience of Tasma House behind me, I was more able to think in layers.  Azidene, with its multiple bathrooms, kitchens, levels and layers, all cobbled together with whimsey junk and fine art/craftsmanship.  It was sold in 2003 and now runs as a popular guest house facility under the name Azidene House.
Tasma House and Gardens, Owner Builder project. 1996-2000 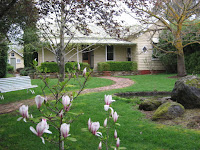 Tasma House was purchased in late 1996 for use as a family home. It had been a guest house in the 1930’s and after a succession of owners had fallen on hard times. Work began by collaborating with a few noteworthy regional artists on the planning of a garden design, whilst I also sourced and collected many second hand materials for the multiple buildings that would make what is here today.  The project was my second owner builder project, having earlier owner built a house in Northcote, but Tasma was to be my first multi building project, and it taught me how to manage multiple decisions and see from many angles. It certainly made an impression as I went on to do two more similarly complex puzzles after the dust at Tasma House started to settle.
Wingspan Artworks 1992-2007 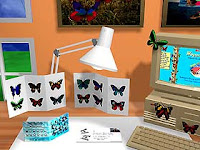 Wingspan Artworks was a craft manufacturing business that wholesaled its output to galleries, gift shops, and retailers, as well as supplying products for sale to various fund-raising organisations.  The product was a small hand painted butterfly, made from a translucent film, and painted from behind, much like a cartoon cell. One year, over 60,000 were made, all by hand, with many hands helping.  It started as a by product of working at a community centre, and facilitating change in the lives of retrenched workers.  It grew by making murals of butterflies, and taking them to markets. Shops around Australia wanted them and an international distributor became involved in the UK ..........
The business ran for 15 years and has now retired, or gone into chrysalis.
Town Hall Community Centre 1988-1994
The Moonee Ponds Town Hall, now a vibrant Arts Facility, was at one time a large community centre, providing space, training, and expertise to its local community. I worked there at my first “real” job, ie working for someone else. The community centre ran retraining programs for many retrenched workers who had come to Australia from non English speaking backgrounds.  I managed a group of programs that, through Government funding and good use of the facility and trained teachers who also had arts training, made a difference in these people’s ability to search for new employment.
Fat Bob’s Cafe and Chubbie’s Restaurant and Music House 1983--1987 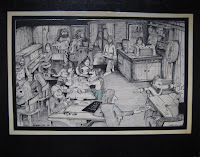 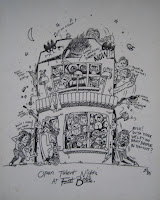 Fat Bob's was my first venture into business. After leaving a teaching degree half finished, and a lot of travel wandering, I knew it was time to pull my finger out.  A three year adventure with my then partner, combining food, music, late nights, and living and breathing what you do.
Chubbie’s Restaurant and Music house was next, only bigger, not better, with the same commitment to live music and food combining. Even now, I get occasional withdrawal, and feel the need for another venue, but common sense pulls me back to the real world....