Last weekend, I played at a small festival in Wimmera, a part of regional Victoria, about 3 hours and another world away from Daylesford. 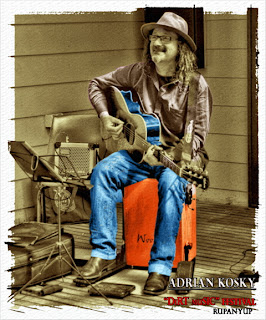 The town of Rupanyup was hosting its first "Dirt Music" festival, and Carla and I and our little pup Jelly Bean took to the open road for some adventure.

The stages were not in Marquees with lots of crowds.  They were on people's verandahs, and in community halls, and the set up had an easy going relaxed feel, with very little between the performers and the people enjoying the shows.

Rupanyup, recently recovering from the January floods where the whole town lay underwater for 4 days, were a kind and hospitable bunch.  We also stayed with a local farmer, and that made our stay so much more social and interactive with the area.

The organisers of the festival, also involved in farming, had recently been through flood, harvest, marriage, and shearing, all since January, and are to be commended for even thinking of something that may benefit the wider community.  Talk about resilience!

The next day Carla and I were privileged to play a gig at the pre opening of the new community facility that has been built with a huge amount of community effort, in a building that was being used for the first time.  Sharing a delicious BBQ with the community afterwards and chatting with local councillors and music lovers and the townsfolk in general was worth as much as the playing was fun.

Rupanyup is doing it tough after years of drought and now flood, but the spirit and stories that abound make you realise there is a lot there to be admired.  The town has a Barley Dinner each year in the middle of a field that attracts 400 people, and the "Pudding Ladies" who have made and sold puddings that have gone all over the world, to raise funds for the running of the memorial hall, are but 2 examples.

I love music that has a bit of grit, and a couple of people from this town have shown they have some too.  Let's hope this festival grows into a good one over the years without the need to clean it up too much......